Go Back To Help Center

How does it work?

Google Shopping Boost creates a unique advertising campaign for your shop in Google Shopping. The Boost Level you select corresponds directly with the campaign budget. The budget that you create is used to "bid", or pay for, clicks. We will go over bid amounts, and more information throughout this guide.

Why do I need Google Shopping Boost?

How much is Google Boost?

The cost of this feature depends on the budget you would like to select. ArtFire charges a fee to cover our processing costs and other potential charges, and the rest goes towards the cost of clicks.

The Budget amount you want to select depends on how many items you have active and how long you are looking to run your campaign. 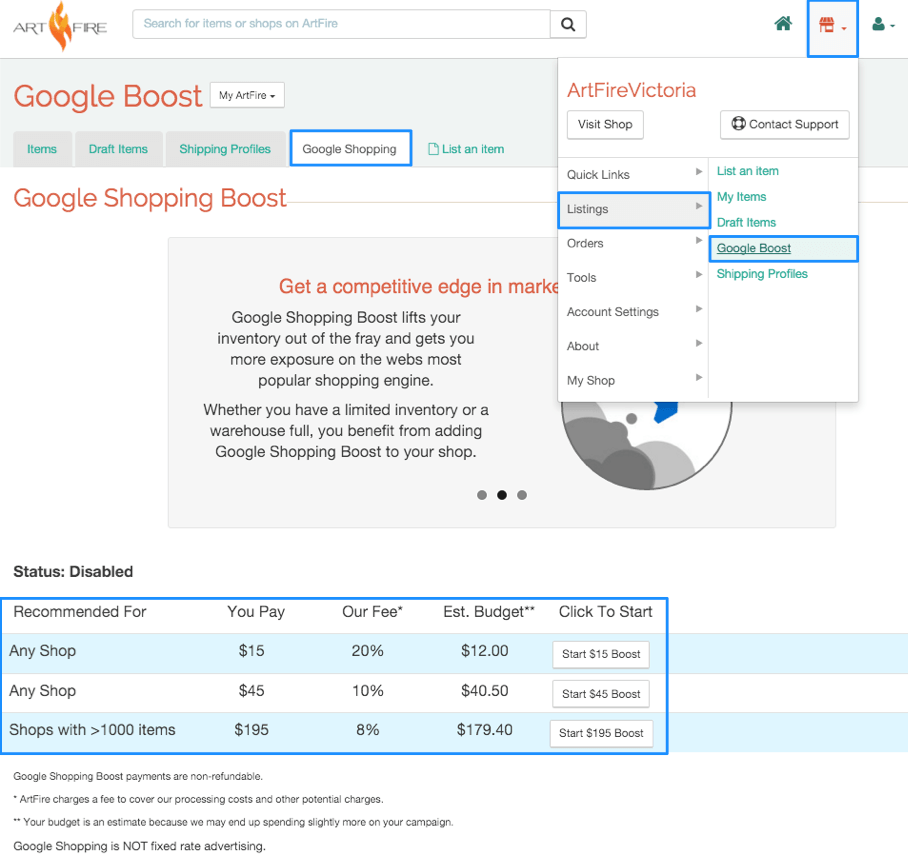 Google shopping is a cost-per-click(CPC) auction style advertising engine. If you're not sure what that means here's a basic overview of what's happening:

Every seller's unique inventory will ultimately generate it's own rates for advertising that can be summarized with stats like: average cost-per-click; average cost-per-conversion; cost per thousand impressions; etc.

Let's look at the Stats Page of an active campaign, and go over each section:

Impressions count the number of people who saw your product (like drivers passing billboards next to a road). Impressions are important for two main reasons. First, the more times an individual see's your products the more likely they are to click on them. Second, knowing your campaign's impressions allows you to calculate your Click Through Rate which can give you an idea of how engaging your product's presentation is.

Clicks are people visiting a product in your shop (by clicking on an "ad" for your product in Google Shopping). The great part about clicks that come from Google Shopping is that, generally, a shopper is in the mood to buy and was looking for a product similar to yours. That doesn't guarantee a sale will happen but it's a great start.

Clicks are also what Google charges for, which makes Google Shopping a cost-per-click shopping engine.

Converted clicks are better known as sales (the "conversion" is a visitor becoming a buyer). These sales are directly linked to a Google Shopping visitor that visited your shop via your campaign.

To summarize this guide, Google Boost gives you a competitive edge for online shoppers using the world's most popular search engine. The campaign and bedgetyou manage is up to you, as well as the the cost you set to bid on clicks.

ArtFire enters submits all eligible items to Google Shopping without purchasing your own campaign, but is limited to a daily budget.If you remain on ArtFire's budget for no extra cost, your inventory fights with 1,000,000+ other products for a piece of the daily budget.

You are viewing this page with IE7 (or in Compatibility Mode). IE7 is no longer supported, please remove compatibility mode or use a newer browser.

We recommend the following: